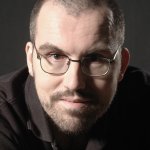 Hello there. This is my short CV. There is lots of other stuff on this site, but it's in Czech. If you are in a hurry, the most interesting texts in English are probably here and here. And don't forget to check out my "social feed" here.

First of all, I am from the Czech Republic and "Frantisek Fuka" is my real name. To be more precise, there is a weird thing above the letter "s" that cannot be reproduced in ASCII. The whole name sounds somehow like "Fran-tjee-shek Foo-kah" (the "Foo" is short). "Fuxoft" is my nickname which I "invented" when I was about 12 years old and started programming first games for 8-bit computers. It was derived from "Fuka" + "soft[ware]" and is supposed to be pronounced "Fooksoft" (again, "foo" is short). I really don't remember if I had any idea back then (in the year 1980) what certain four letter English words mean, but if I had, I didn't care. (BTW, "Fuka" is certainly not usual Czech name and "Frantisek" means "Franciscus" or "Frank".)

Several years after that, I got rather famous among the Czech computer fans (if that isn't contradictory to the definition of "famous" because there certainly weren't millions of them). I programmed several games and other stuff for Sinclair ZX Spectrum computer. You can get almost all my Spectrum stuff in this ZIP archive but most of the dozen or so programs are text games ("adventures") in Czech language. The only two games that got some sort of "international exposure" were "F.I.R.E." and "TETRIS 2". (Unfortunately, there were several different games, all of them called "TETRIS 2". Screenshot from my "TETRIS 2" is below.)

In 1986, when Spectrum 128 became available, I started experimenting with computer music ("computer music" back then meant "something sounding almost as good as the oldest Kraftwerk stuff, but in mono"). This carried on into my work with other computers: Namely Commodore Amiga, SAM Coupe, plus other machines here and there. You can get all my music for Spectrum's AY8192 chip (the same that was in the old Atari ST) from this archive (the player for Windows is included). If you don't remember those times, you probably won't be physically able to endure the sound, but remember that this was cutting edge stuff. I basically created my own interpreted programming language for storing music (it had loops, subroutines, variables etc.). You can download my original 8-bit music as a DRM-free MP3 album and its remixes and more of my recent music in this album.

As anyone interested in computers, I also became interested in BBSs (bulletin board systems) and later the Internet. Even today, I work on several websites (for example, I am one of the founders of www.kompost.cz no-brow humor site). But, as you can see from the page you are currently reading, it would be a stretch to also call me "web designer".

I also became interested in the movies quite early and I was able to start writing movie reviews for "Cinema" magazine and translating movies for Czech Release in the early 1990s. I have my weekly movie internet column at novinky.cz news site called FFFILM, I am a co-host of local radio show, I created and programmed massive multiplayer SMS game for Eurotel Czech Republic (no longer running), I am web-publishing the Czech version of Red Meat cartoon (with kind permission of the author), I composed soundtracks for two movies you never heard of and other stuff I probably forgot about.